Friday, 12 November we welcomed Anthony Nield back for the first time since the first lockdown.  He painted Leicester Square in Penshurst, Kent.
For meeting No. 2 after the summer break on 8 October we had our AGM and for the second half of the evening Ian Penney demonstrated his paper cutting art.  The beetles on the bottom right are a close up of Darwin's beetles where each one has been individually hand-cut and pinned and were exhibited alongside more of Darwin's findings from the Galapagos.   An entertaining and instructive evening.
On Friday, 11 June, Marilyn Allis demonstrated two watercolour scenes.  This was our final Zoom presentation for the summer break.
On Friday, 28 May, we welcomed George Boyter who showed how to highlight and create interest in a scene where the weather was overcast and not much of a promising initial composition.  This resulted in a very interesting evening.
On Friday, 14 May, Mick McNicholas showed us how he creates a portrait in nitrate charcoal from a photo.  He began by applying charcoal dust with sandpaper to the surface of good quality Saunders paper.  This is the final result with some close up shots.
24 members attended and one member commented that the demonstration 'was inspirational'.  The evening was very well received.
On 30 April Alison Board gave us a wonderful demonstration of her work using watercolour and mixed media.  She used watercolour ground on a music manuscript and worked on top with watercolour and ink pen.  21 members attended the zoom evening.
On Friday, 9 April Lawrence Quigley spoke via Zoom about how he uses a palette knife with oils.   He referenced well known artists who used oils in this way and demonstrated a still life explaining his way of working.  https://www.wykehamgallery.co.uk/artists/263-lawrence-quigley/overview/. 24 members attended the meeting.
He has exhibited extensively throughout the UK in both one man and group shows and he has been the winner of many artistic awards. 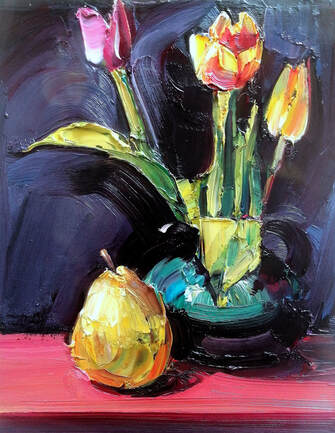 Final painting which Lawrence spent two further hours completing.
On Friday, 26 March, David Chandler (https://www.davidchandler.net/portfolio-category/portfolio/) demonstrated the styles of two artists which are featured in his new book entitled 'Master Watercolour'.  The first was John Varley (1778-1842) and after the break it was, Raoul Dufy (1877-1953).  David is an excellent demonstrator and holds the interest of his audience.

David has since completed each of the paintings - refer to photo 4 in each group.
The above photos depict the style used by John Varley which David demonstrated and below, Raoul Dufy.
Vic Bearcroft, artist, demonstrated by Zoom on Friday, 26 February.   Using pastels on velour he created the picture below of a wolf in a misty wood from scratch.  26 members attended.
https://www.vicbearcroft.co.uk
On Friday, 29 January, Jeremy Ford produced a snowy scene using pastels.   It was one of the few demonstrations where the artist completed the work. 28 members were present during the evening and many more have since watched the recorded demo.   Many positive comments received.   http://www.jeremyford.com     (The colour in the paintings below is darker than it actually was.)
On Friday, 8 January we held our first Friday evening meeting of 2021 by Zoom.   Catherine Beale demonstrated her approach to watercolour painting showing us how she uses gravity to create her light-filled paintings.  26 members joined the meeting.
2020
Our second Zoom offering was on Friday, 13 November and Richard Crabtree demonstrated painting a tiger using oils.   Four stages of the process are displayed below including the final beautiful result.
​https://www.richardcrabtree-artist.co.uk
On Friday, 11 September, we resumed our Friday evening meetings after a long break due to the lockdown and welcomed Pauline Hazelwood, Artist, who demonstrated a water scene with oils.  21 members attended the meeting.

Pauline grew up in Devon and after leaving art college in London, from 1984 worked as an illustrator in publishing, editorial and design. She later started working in oils and watercolour for private commissions and paintings. As well as illustrating childrens' books, she has exhibited work at the National Portrait Gallery and Mall Gallery.
On 13 March we hosted Jim Patterson, owner of Two Rivers Paper in Somerset, to give us a talk and demonstration.

He and his three colleagues operate the business in the only place in the UK where water power is used to make paper from old rags.  Their paper is made by hand and therefore has a unique random surface texture unlike the mechanically even weave of most other branded papers.  This also means that there is not a right or wrong side as both sides are identical.   As well as watercolour, the paper is suitable for various processes including pastels and oils.    As the paper is incredibly hard sized (both internally and surface sized with gelatine) it allows the painter the luxury of pushing paint around for much longer than with more absorbent artists' papers. The paint is not drawn into the paper so the pigment dries to a sharp and brilliant finish.   The inclusion of linen in its make-up results in an unusually tough surface which will resist much lifting out, scrubbing and re-working and we were shown how easily paint is lifted out.    As a result of being on Escape to the Country and other such media events, they are kept very busy keeping up with orders. 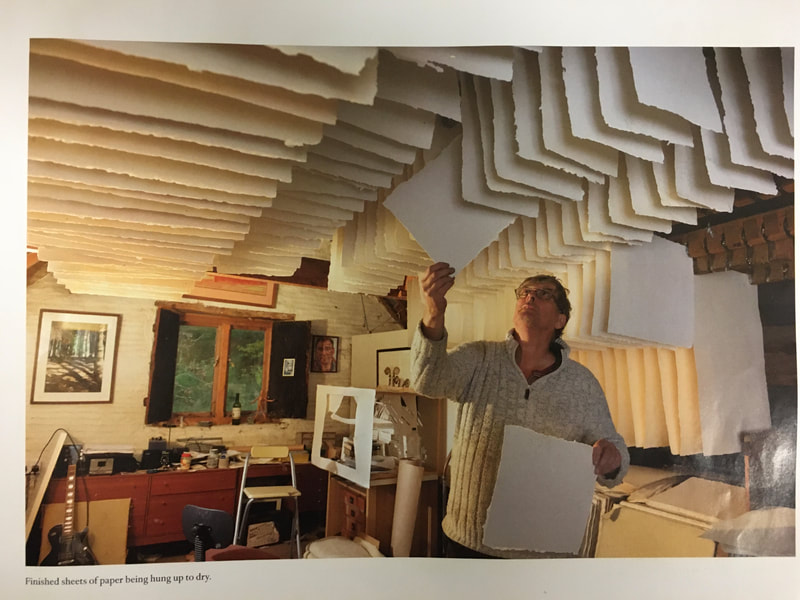 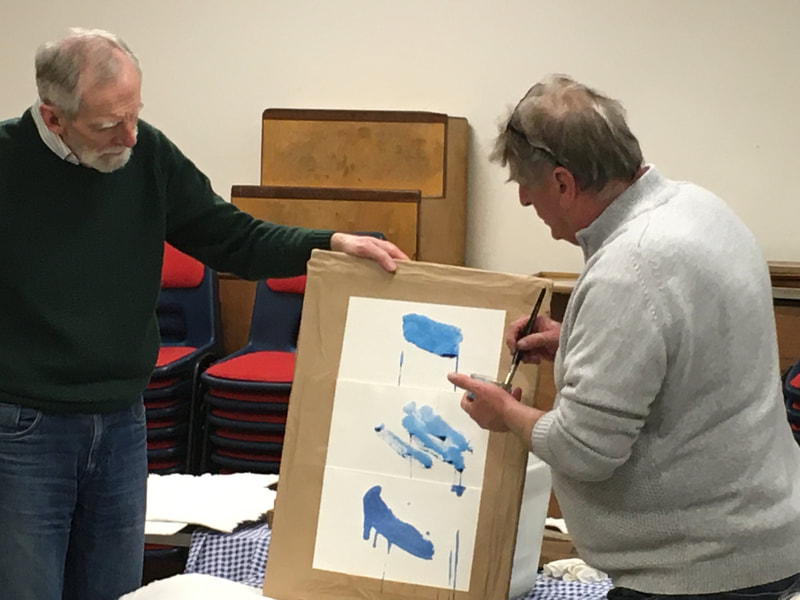 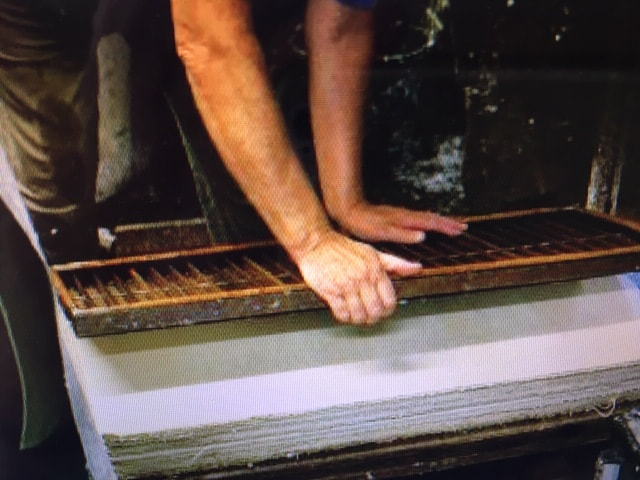 On Friday, 14 February, we hosted Lewis Hazelden-Horner who painted a still life using oils.   The subject was Pete Hayes’ hand holding a bottle of beer with a pork pie.   Lewis said that sometimes it takes him years to complete a painting and that this was just an oil sketch.  He took photos of the ‘props’ at the end and promised to complete it in his studio and the finished painting will be posted at a later date.  He told us about his life in London, showing a glimpse of a London we don’t usually see.  It was a very entertaining demo. 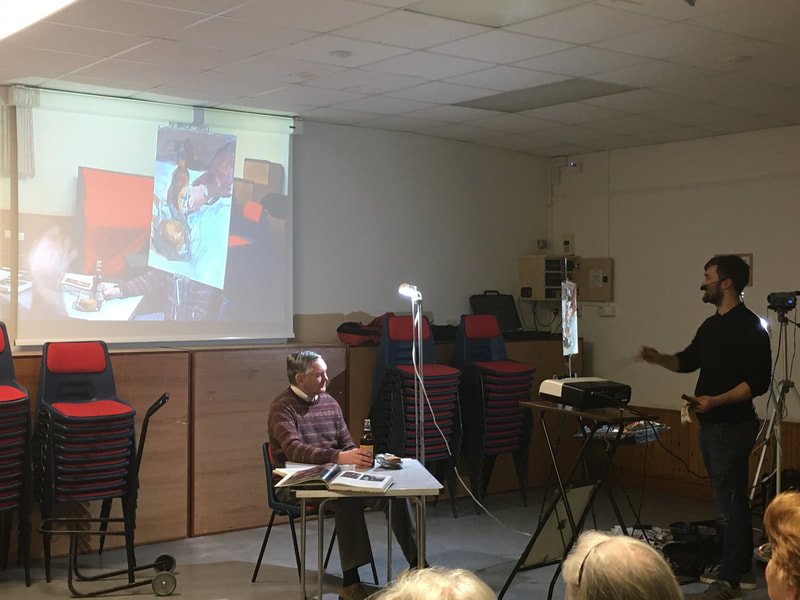 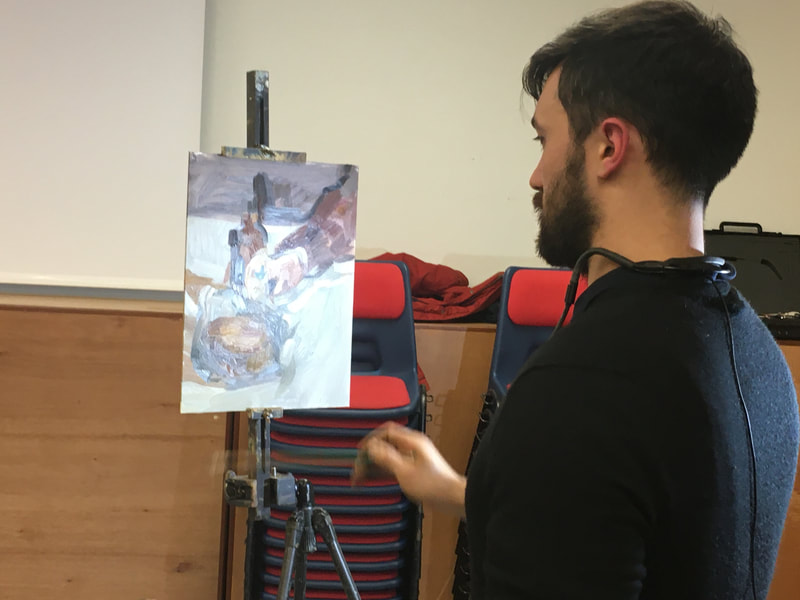 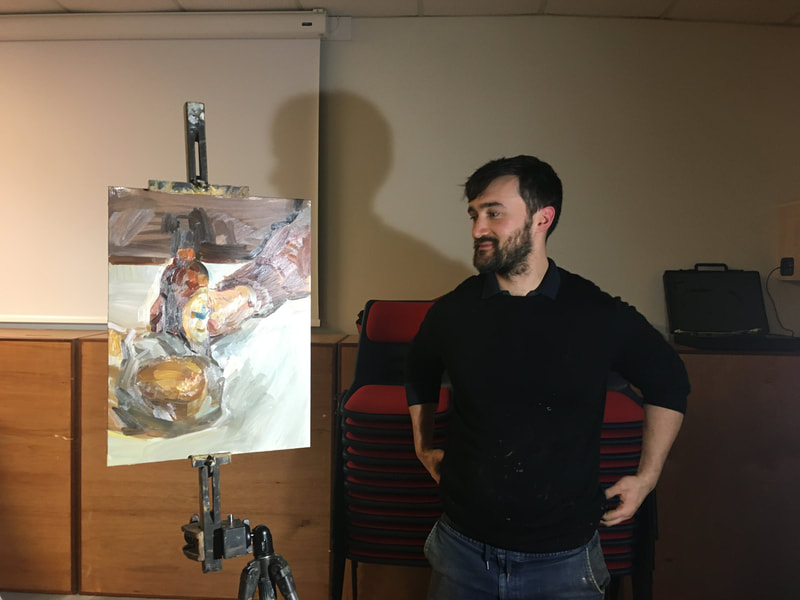 For info: Lewis mentioned a BBC documentary about the Scottish artist, Peter Howson, which showed the artist creating his painting entitled ‘ Prophecy', step-by-step, from inception to sale.  This was on BBC iPlayer.
2019
On Friday, 8 November, Tony Parsons, a professional artist who is based in Brighton demonstrated portrait painting using oils.   Committee member, Kate Foster, was the model.  It was a thought provoking demonstration with Tony sharing some quite radical views regarding his art.  He will shortly be in Landscape Painter of the Year on SKY Arts.
Commencing our Autumn season on Friday, 13 September, we welcomed Heather Miller who showed how she paints a landscape with acrylics;  the subject being a bluebell wood.   Heather uses wide edge brushes as shown in one of the photos below.  It was a successful evening with good member attendance and several visitors.
On 14 June we held our Annual General Meeting.   Attendance was good and after the short meeting, we had wine and nibbles and looked at artworks which had been brought along by members.

​There was a short talk by Karen Thomas who described combining her love of art with helping vulnerable people and those suffering mental health issues.   The title of the talk was 'Drawing from your imagination' which is a difficult topic to tackle.
On 10 May we hosted Colin Brown, street scene artist who came from Bristol.  He had pre-drawn his board and started work with the board upside down concentrating on the shapes, light and tones.   He explained how he loaded his brushes to give a straight striped effect.  The aim was to achieve a realistic interpretation of an Amsterdam canal scene.  After about 3/4 hour the board was turned the correct way up and some detail was put in.  However, the final painting below was not finished as it takes some hours and Colin only had 1 1/2 hours.   For details of Colin's work http://www.artprofile.co.uk/artist 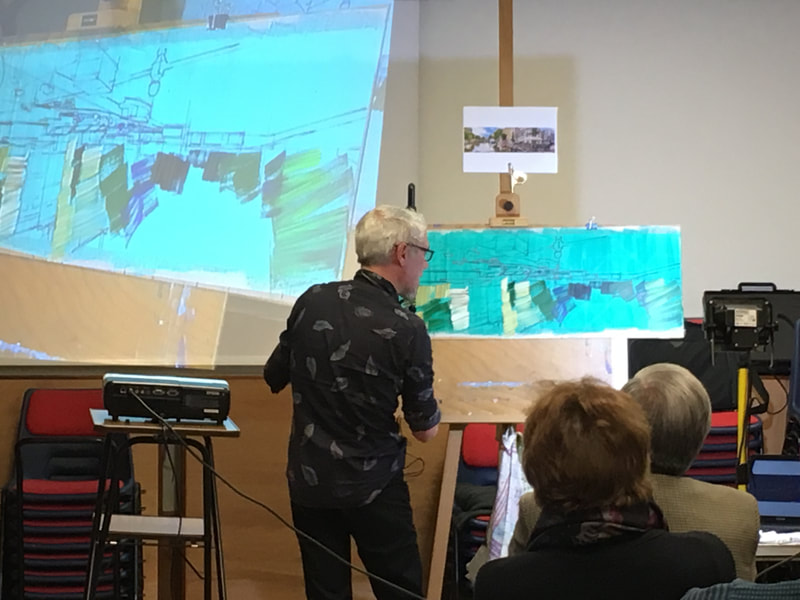 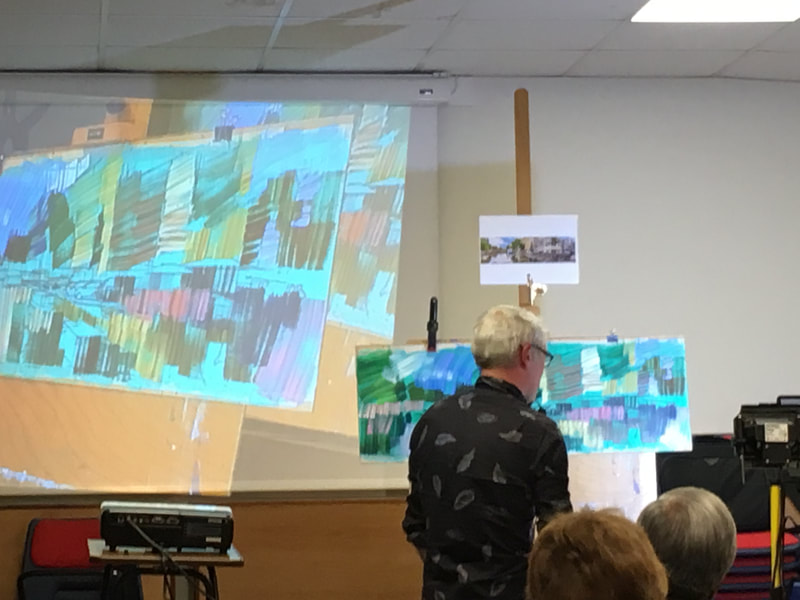 Norman has an art studio in Lincolnshire where he holds classes, workshops, demonstrations and exhibitions.   He also travels all over the UK giving demonstrations and workshops to art groups and societies and on Friday, 12 April 2019, he visited our Society.
He is a full-time professional artist specialising in wildlife, landscape and the countryside with wild birds being a favourite subject and utilises mixed media ie., acrylics, oils and pastels.

Below are paintings of Puffins and a Widgeon which Norman demonstrated to us during the evening.  Thoroughly enjoyable evening. 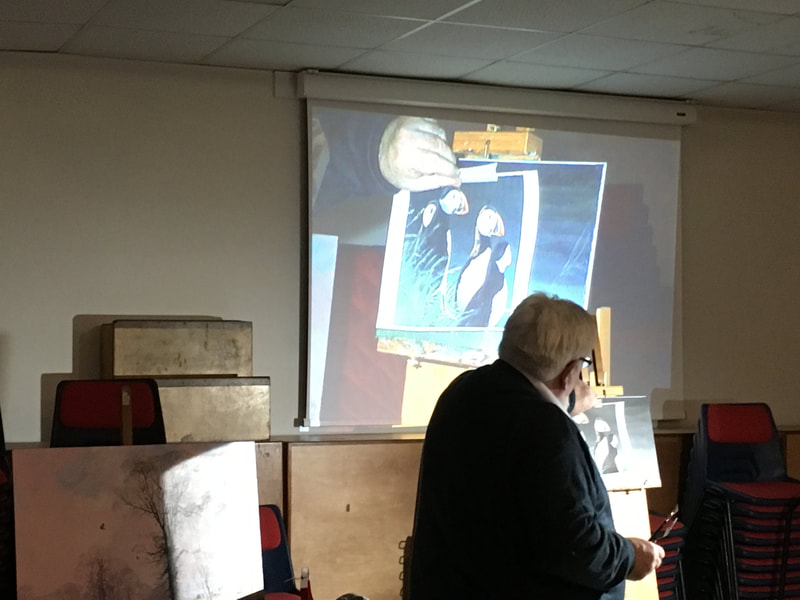 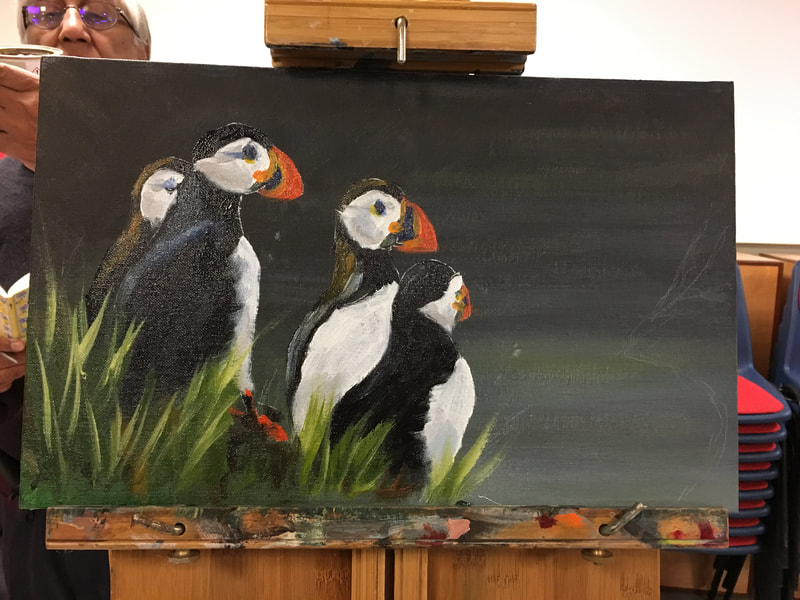 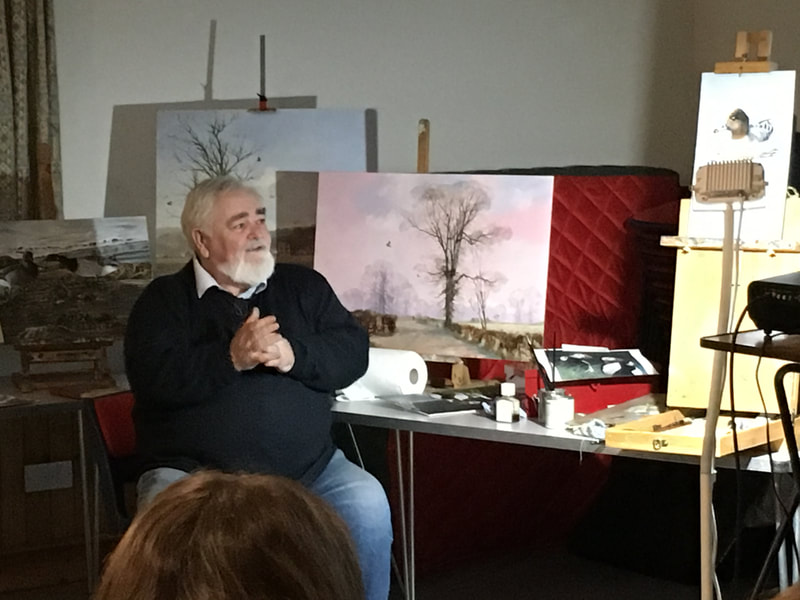 On the 10th February, Sonia Bacchus (2 pictures below) gave a very interesting illustrated talk about women artists throughout the ages. This was well received by everyone. 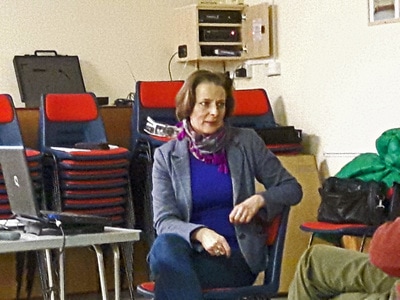 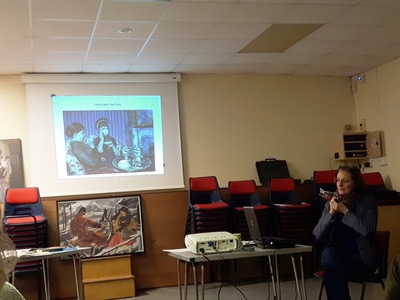 Our first Friday evening meeting this year(2017) was with Anthony Nield (below).   He handed out copies of his original sketch so that we could follow step-by-step in conjunction with the overhead screen.   The demonstration was a great success and Anthony's narrative was both instructive and amusing.  There was a good turnout from the membership despite the icy evening. 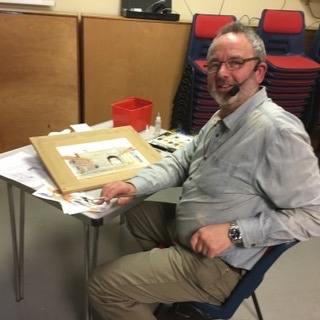 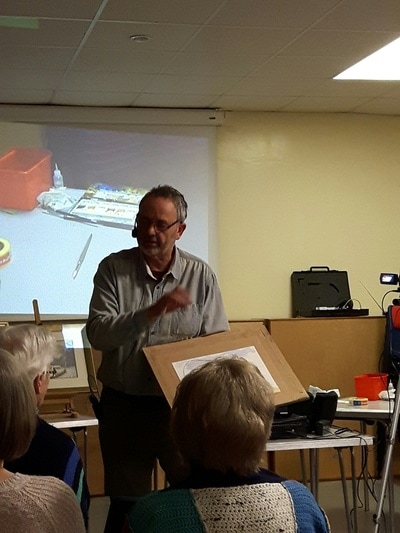 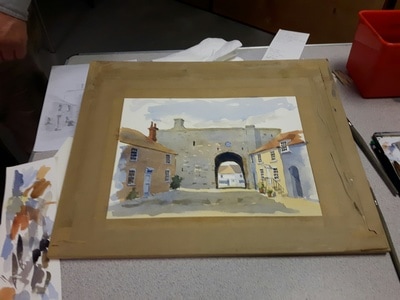 ​On 14 October, Paul Alcock (pictured with almost finished work) gave a demonstration of using acrylics.   He reproduced a street scene from a photograph.
On Friday, 13 May, Peter Robson kindly stepped in at very short notice to give us a watercolour demonstration.   His style is very unfussy and he paints very quickly.   Please see the excellent mountain scene below.

On Friday, 11 March, Keith Morton produced a preliminary portrait of one of our members, Sue Smith.   Attendance was high and Keith's performance was applauded.   Afterwards, he handed the painting to Sue.
On 12 February, Ronnie Ireland gave a very different demonstration on the use of pencils and charcoal - to great effect.   Shown below.
Our first demonstration for 2016 was with Joel Wareing who used soft pastels in an urban setting.   Shown below. 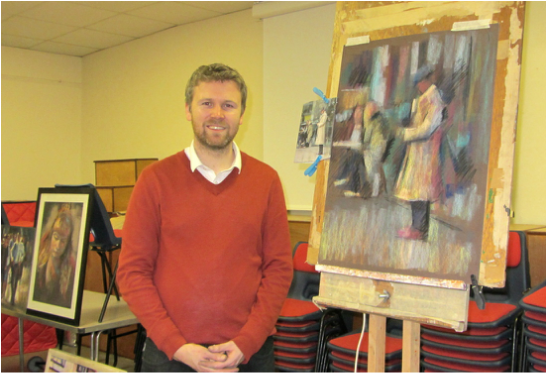 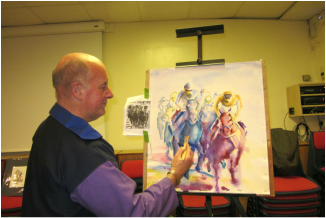 On Friday, 13 November 2015, Stephen Cheeseman demonstrated how to use watercolour in an impressionist way.   He drew a horse race from a newspaper cutting and explained in detail each of the steps he took.   The final result is as below.   Attendance was high again and everyone enjoyed the evening.
At our meeting on 13 October we hosted Hashim Akib for the first time, although some of our members are well aware of his work.   As expected, attendance was high as Hashim gives a masterful and humorous demonstration.  When he starts it is using bold strokes on a brightly prepared board, using very wide brushes.   When he completed the painting it looked as below: